Skip to content
Press Enter / Return to begin your search.

I made this once before but never blogged about it, because I didn’t quite feel like I had the right proportions for the ingredients. So I did a little research and read lots of recipes. I  decided to use Giada’s recipe for Penne with Vodka sauce. It did not fail!

I used my sauce recipe instead of hers, which you can find here (minus the meat).

Meanwhile, cook the pasta in a large pot of boiling salted water until al dente, tender but still firm to the bite, stirring occasionally, about 8 minutes. Drain the pasta and transfer it to the pan with the sauce, and toss to coat.

I added 2  shredded chicken breasts to the mix for a little extra protein. Next time I might throw in some broccoli or other veggies for a nice vegetarian version. 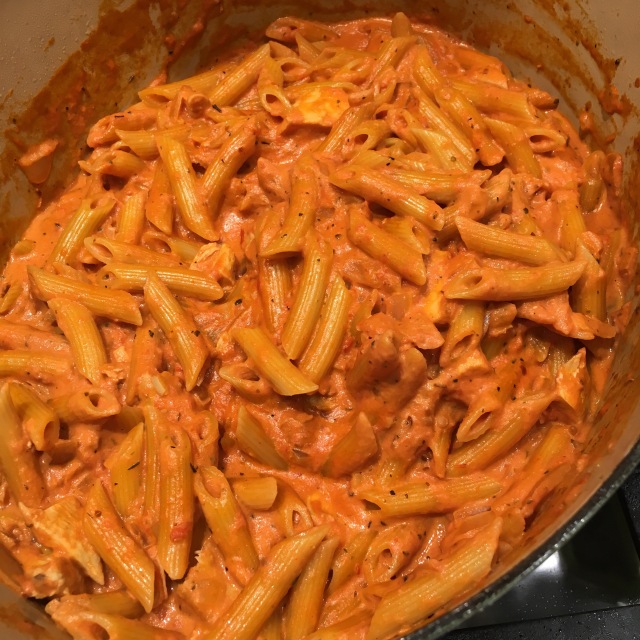 I am a mom of 3 girls, teacher, and I love cooking and experimenting in the kitchen. This blog is my way of sharing my experiences with those who wish to follow. View all posts by amybtwink

One thought on “Penne with Vodka Sauce”

Luxury travel to cocktails, cheap eats and everything in-between!

A food blog with simple & delicious recipes for all diets

That Other Petra Guy

open your mind to a growth mindset and new perspectives

Drawing a line through 50

Hello, everyone! My name is Nadiia, you probably noticed, I have another blog about healthy eating and sports, it is my passion) As for this blog, I just decided to share my thoughts, my feelings. Do not judge, I am not a professional writer, I just trying to express myself.

Farm Fresh Food to your Doorstep

Michelle Rose. Reflection of My Journey

Drowning in the busyness of life, and how I stay afloat, and find peace and stillness amidst the chaos

Rocking Happy Animals
Blessings by Me

Frugal Living Tips & DIY's From My House to Yours

Hello,everyone! This is a blog about fitness, healthy food, and all what we love. Here you will find advices, ideas and motivation to change your life. If you think it is impossible, you are wrong, you can do it!

Chronicles of a Safari Kitchen

Simplicity in food and travel

Vegan-Friendly Stories for all ages

All about exploring the world

The journey of a single mom